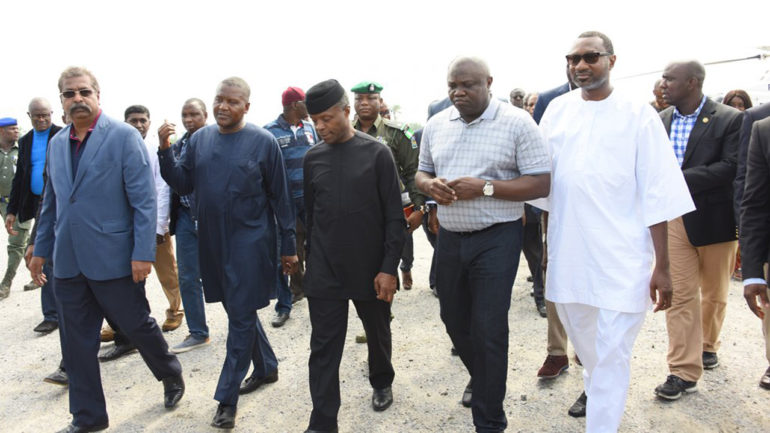 Vice President Yemi Osinbajo, yesterday, raised hope that by the first quarter of 2019 the nation’s refining capacity would be sufficient for the domestic market and export at the completion of Dangote refinery project in Lagos.

Osinbanjo, who spoke yesterday during a brief visit to the Dangote refinery site in Lagos, was optimistic that the project would also boost gas supply to power plants through the three billion standard cubic feet per day gas pipeline, said the facility would buoy export earnings after meeting the nation’s current requirement of two billion scfpd.

According to him, the gas pipeline, slated for commissioning in 2018, would take off from Bonny through Ogedegbe to Olokola and onward to Lekki. He added that the line would hook up with Escravos-Lagos pipeline and the West African Gas Pipeline.

He estimated that the project would aid the country with about $7.5bn forex savings on import substitution; generate $5bn forex earnings from savings and another $5.5bn export earnings.

The plant, according to him, will generate over 100,000 employment opportunities and revive over 11,000 filling stations that have been shut down due to shortage of products.

He said the project was designed to process large variety of crudes, including all African crudes, a range of middle-eastern crudes and U.S crudes.

Chairman, Dangote Group, Alhaji Aliko Dangote, said he is committed to the multi-billion dollar project to aid the nation’s economy.

“We are putting in 65 million cubic meters of sand and that was why we brought in three dredgers, two of which are the biggest in the world. This place is eight times the size of Victoria Island,” he said.

On allegations of conflict with the host community, he said there are no issues, noting that the past issues were between two communities and the state government.

“We did not buy the land from communities, we bought our land (swamp) at $100m and the filling of the swamp to become solid land is costing us another $420m.

“The petrochemical is 13 times that of Eleme petrochemical. It is 10 times of NAFCON and therefore, the largest fertilizer plant in Africa”, he said.

He said the holding company, Dangote Industries Limited, which is different from Dangote Refinery, took an initial loan for the project that has accrued an interest of $173m, stressing that, contrary to speculations, the company has not gotten substantial forex from the Central Bank of Nigeria.

Dangote stated the impact of the new forex policy on the project saying: “We lost almost N50bn to new forex regime. Every single money we make in the country is ploughed back into the economy. I don’t have a single block outside Nigeria, I am a proud Nigeria and I believe in this country.”

Dear client, we appreciate you doing business with us and we’re happy to introduce our 2023 – 1st Half Client Appreciation Incentives as follows;   BUY ANY PROPERTY THROUGH US (TPI HOMES) AND GET ANY OF THE...
Read more
July 2, 2022